Located in the South Burnett Region, Kingaroy is an agricultural town and shire with a population of about 12,500 people. The country town is positioned around 200km (2.5 hours drive) northwest of Brisbane.

Surrounded by picturesque farmland, rolling hills, the Booie Range to the northeast, and the Bunya Mountains to the southwest, the Kingaroy shire enjoys a mild, low-humidity climate. Summers are warm, and winters get quite cool, making it a perfect escape from Brisbane’s tropical climate. 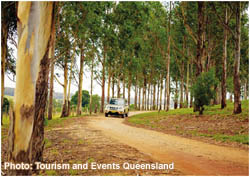 What Does the Name Kingaroy Mean?

The name Kingaroy comes from a Wakka Wakka aboriginal word meaning ‘red ant’. The Kingaroy area is home to a unique species of ants that have developed their bright red colour due to the rich, red soils of the region.

Kingaroy is known as the ‘Peanut Capital of Australia’ as it is home to Australia’s largest peanut processing plant. The two peanut silos are local landmarks. 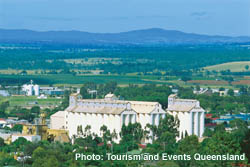 Things To Do Around Kingaroy

The town of Kingaroy is the largest in South Burnett, but retains the spirit of a friendly country town. The CBD has everything you’ll need: shopping facilities, petrol stations (including a 24 hour petrol station), restaurants, fast food outlets and cafes. 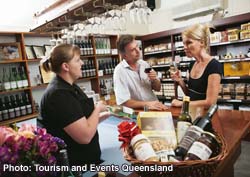 Visit the Kingaroy Art Gallery, which exhibits both up-and-coming and established artists from throughout the region.

The Visitor Information Centre is located in the town’s Information, Art and Heritage Precinct, opposite the twin peanut silos. Here you’ll see a collection of historic buildings, as well as the Heritage Museum. The Museum focuses on the history of the peanut industry, with machinery dating back to the early 1900s. Local peanut farmers invented some of the machinery on display. 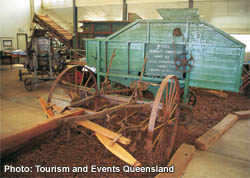